Learn To Play 5 Metallica Riffs From The Black Album 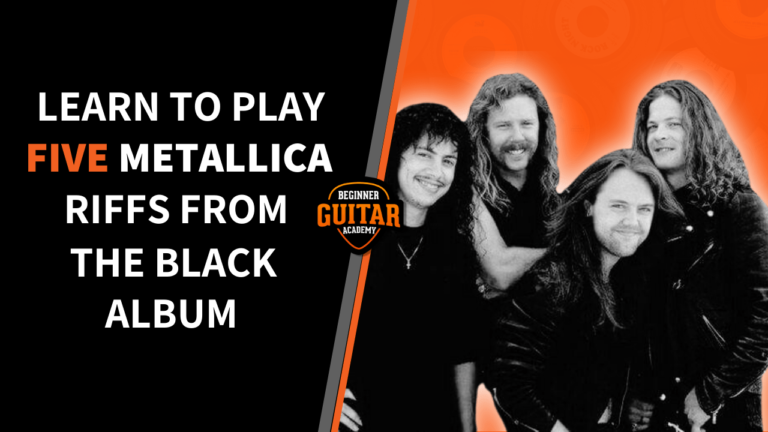 On the 12th of August, Metallica’s self-titled fifth studio album turned 30 years old. Commonly referred to as the Black Album due to its artwork, this album saw Metallica move away from the Thrash Metal style of their previous albums and instead produce an album with a slower, heavier, and more refined sound.

The band’s goal was to produce an album like AC/DC’s ‘Back in Black’ containing shorter, punchier songs, all of which could be released as singles.

I doubt even the band knew how successful the black album would become. It debuted at number one in ten countries and is certified 16x platinum making it one of the best selling albums in US history.

To celebrate the Black albums 30th anniversary, I have recorded videos showing you how to play the main riffs from all five of the singles released from the Black album.

So grab your guitar, tune-up and let’s get rocking 🤘

Enter Sandman is a great riff for beginner guitarists to learn as it only contains a few notes, is pretty slow and does not require moving around the neck, so it should not be too challenging.

This riff starts with a few bars of fingerpicking an A chord before moving into the lead melody. The melody is not too bad and is great for practicing lead techniques such as slides, hammer-ons and pull-offs.

This is such a cool riff consisting of just an E5 chord and a series of pull-offs. A great one for beginners as it shouldn’t take long to get under your fingers.

There is, however, a Bb5 chord at the start, and if you are not familiar with this chord, it might take a little while to get your finger used to it. If the stretch is a bit tough using finger three, you can use finger four instead.

This song has a great sounding intro that sounds quite impressive if you can pull it off. However, you will need to be pretty happy with fingerpicking to crack this one, and it is one to break down into small chunks and work through slowly.

5: Wherever I May Roam

This is by far the toughest riff of the five, so be patient, break the riff down, and work through slowly to develop the techniques and build up the phrases.

I hope you enjoyed learning these riffs, and if you are looking to get more from online guitar lessons, I would like to invite you to come check out our online guitar school Beginner Guitar Academy .

Beginner Guitar Academy teaches you everything you need to know through online lessons and classes, teacher support and resources to help you improve every day.

I hope you have enjoyed this article and if you have any questions or comments, drop them below.